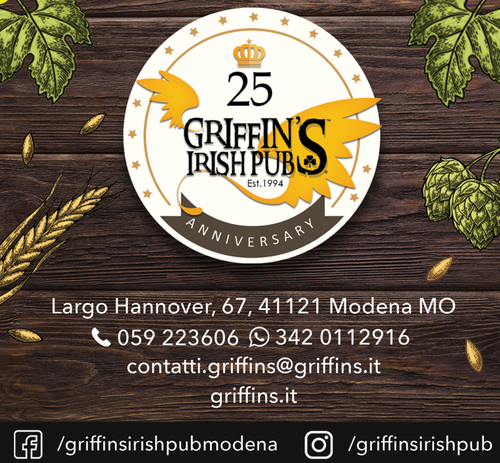 Within the historical places, recognizable by the enviable Victorian arches, Griffin’s Irish Pub offers a wide selection of the best beers in the Anglo-Saxon world. Traditional culinary delighting mentoring allows you to spend memorable evenings in the name of tradition and simplicity.

Charlotte Brunswick-Lauemburg-Hannover
(Charlotte Felicity, 8 march 1671 – 29 september 1710).
Rests in the Church of San Vincenzo in Modena. Where once the horses rested, now people meet each others at Griffin’s Irish Pub. Located in one of the historic Hannover accounts 700 stalls, Griffin’s Irish Pub there resides since 1994 for the will of the Guinness of Dublin. Largo Hannover is one of “historians” of Modena. All the stable facing the square was a properties of Benedetta of Brunswick-Lauemburg-Hannover, mother of Carlotta Felicita, who married the Duke of Modena, Rinaldo d’Este.
Griffin’s Irish Pub
Griffin’s Irish Pub was born in 1994 from a project commissioned by Guinness, positioned in one of the most beautiful corners of the city of Modena, between Via Gallucci and Corso Adriano, and easily recognizable from the lovely and wooded Largo Hannover.
Largo Hannover
The “Largo”, was once known as the “square of Pam d’Or” where probably took a small market of tomatoes and where there was a fountain bearing a large tomato painting on it. Benedetta of Hannover had built a stable that from then on was known as “Stables of Hannover”.In the late 1700s, the stables were intended for horses’s post and later, for many years, they hosted a workshop of a popular “Moto Guzzi” motorcycles, while in the wing of the building which was on the corner of via Gallucci was established the “Fabbrica del Gelo” ( Frost Factory) who supplied with ice all over the city.